On 30 September 2017, DYKA Plastics nv (a subsidiary of the Tessenderlo Group) celebrated its 40th anniversary with an Open Day at its business premises in Overpelt. In the presence of Luc Tack (CEO Tessenderlo Group) and Stefaan Haspeslagh (Chairman Tessenderlo Group), more than 500 employees and family members visited the production sites, the quality service and the technical service. DYKA Plastics has been a leading manufacturer of plastic piping systems for 40 years and at its site in Overpelt it produces more than 15,000 kilometers of pipelines each year for residential, road and industrial construction. Last year, DYKA Plastics realized a turnover of more than 50 million euros and employs 175 workers in Overpelt and its eight Belgian branches. As part of further growth, the company currently has five vacancies for its branch in Overpelt.

"DYKA Plastics is nowadays much more than a pipe manufacturer. For example, we offer numerous sustainable solutions for the heavy material damage that many sewers are currently suffering. For 40 years we have been manufacturing plastic piping systems that are increasingly used to replace traditional materials such as concrete and vitrified clay. In addition, in recent years we have invested in the heavy-duty SOLYDO® range, a high rigidity plastic drainage system, with a high impact resistance (even at lower temperatures), strong resistance to dynamic transport load and excellent corrosion resistance. The market for plastic pipeline systems is still growing and we see plenty of opportunities for DYKA Plastics," explained Luc Tack (CEO Tessenderlo Group).

40 years of DYKA Plastics in Belgium
The history of DYKA Plastics dates back to 1957, when the firm DIJKA was founded in Steenwijk (the Netherlands). Mr. Van Dijk, a Dutch plumber, was looking for a replacement for lead in sanitary applications. He started producing PVC fittings from plastic pipes. In 1975, the first foreign branch was inaugurated in Temse. Due to the continued growth, a production unit for the Belgian market was also necessary. In 1977, DIJKA Belgium started with twenty employees at a new factory site in Overpelt. From this moment on things really took off: in 1979, the PVC extrusion lines were expanded with a PE line. One year later, new branches were opened in Harelbeke and Zaventem, and a second production hall was built in Overpelt. In 1987, the name DIJKA was changed into DYKA and the company was acquired by Tessenderlo Group. In recent years, the company in Overpelt has also invested in multiple PP lines for rainwater drainage and sewer systems. Today, DYKA Plastic Pipe Systems in Belgium has branches in Bruges, Temse, Hoogstraten, Overpelt, Harelbeke, Zaventem, Charleroi and Grâce-Hollogne. 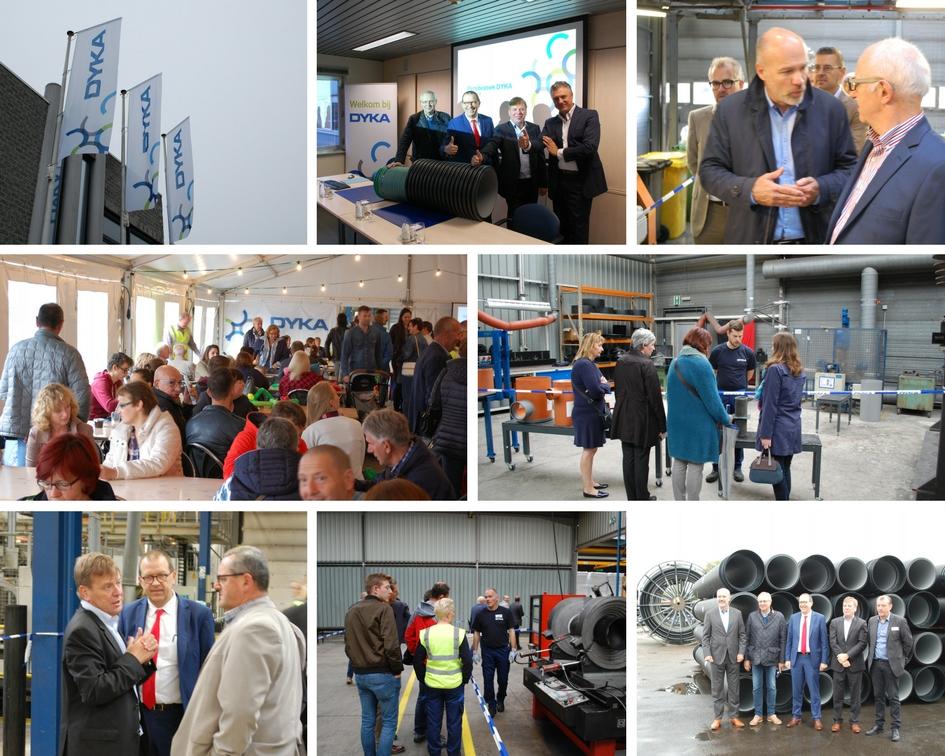